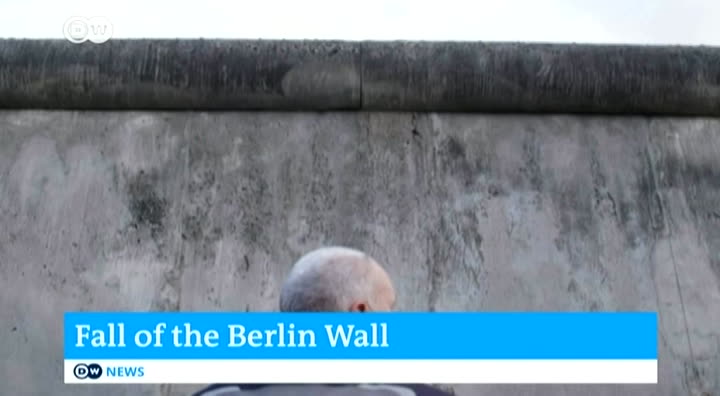 remembers the political blunder that started it all and speak to an east german artist of his experience of that night. europe's top prize for cultural initiatives and the managers to make them happen. well outside germany few people even know his name but good to schabowski is one of those improbable men of destiny a man who made cold war history without even realizing it the former political member is credited with accidentally sparking the fall of the berlin wall by announcing in error that new rules allowing east germans to travel were effective immediately the note she consulted at a press conference on november 9th went missing for a while but it's now been acquired by the german state and is on display here in
10:46 pm 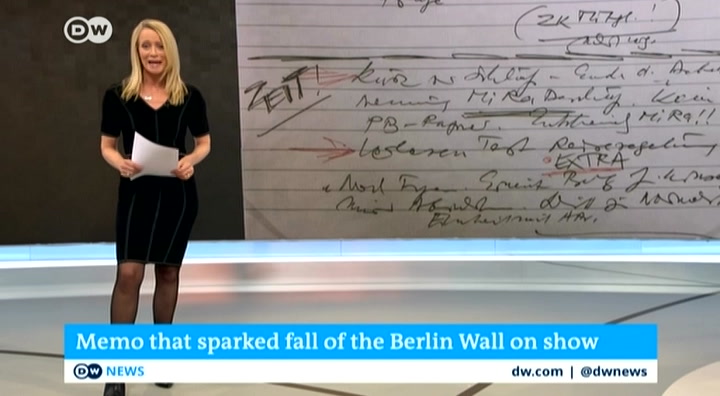 berlin and we sent our intrepid adrian kennedy to investigate the story of an iconic movement so we're here at frederick stross a train station in the fire you must promise of to us which was effectively the border between east and west and we're here to have a close encounter with a famous shot. 1st it's not my. interest figuration. careless words. all germans will remember forever these. scribbled notes watch could go. this is it this is it. really just just arrived yesterday the german state paint for schabowski famous. german taxpayers paid $25000.00 euro's for that note which is quite a lot of money but if you take into consideration what you see here and what the
10:47 pm 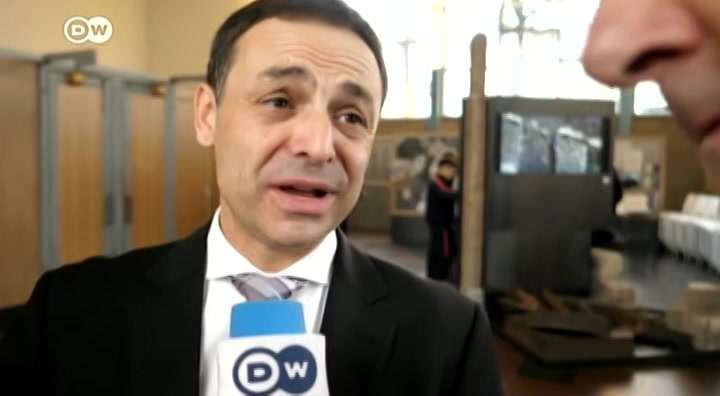 note itself stands for we thought it is quite a good investment. so i actually did pass through here quite a number of times in the days of democratic republic in 1970. woman. german friends of mine and in spring of 1009 she asked me if i would enter into a marriage so that she could leave the g.d.r. . so i passed through here quite a number of times coming here your passport for interested wish this was the famous press conference took place it was the international president of the german democratic republic it's now part of the justice ministry let's go and see the room but the ministry has removed the building the room has disappeared together with most of its contents. this new room this new conference room the only thing that remains.
10:48 pm 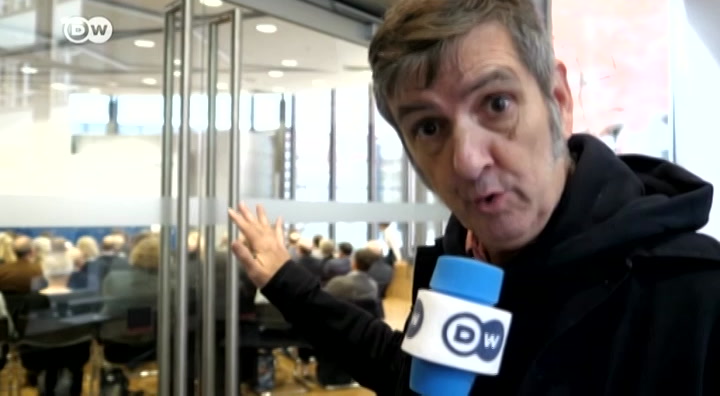 this could be the. entrance of british because this is a very special event a wee union meeting of all the journalists who were at the. press conference or who worked on the night that the berlin wall fell. since that announcement by mr schabowski everybody one note what does it mean he said now emitted live right now what does it mean and some pipes people told me then later who lived in east berlin well we thought about it you didn't really listen to it but then maybe an hour or 2 hours later with you came up with a discussion what does this mean this immediately right now ok let's just go and see if maybe it is now right now intrinsically. completely clear at
10:49 pm 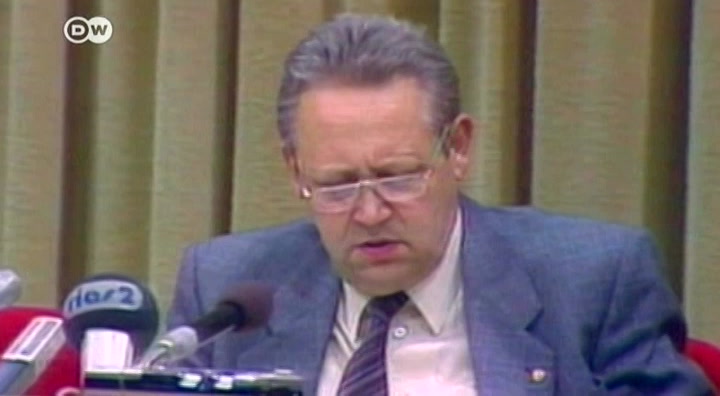 that moment that the war would collapse into at night would you pay 25000 euros for schabowski note. no why it is a world famous piece of paper that led to a world changing the rent so what is the right price i was actually engaged to an east german woman for political reasons as you know and so i my reaction was my fiance will be here in one or 2 hours and hygiene was not the top priority so i spent the night training in the toilet with a toothbrush. sometimes destroyed my very very banal human reactions the rest is history history. the story. it's
10:50 pm 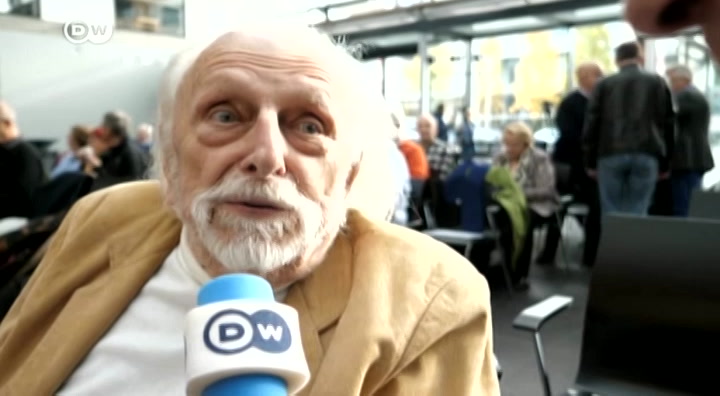 a never ending story. never ending story of the of the boat and. german history at its best all dead live head story expresses perfectly what those images from november 9th 1989 to the people of back then he worked as a graphic artist making movie posters for the former east germany's only film company and on the night the wall opened he was one of the 1st east berlin or succumbs through the checkpoint at the city's bon bon home bridge only to embark on the most memorable night of his life. nov 9th 1989 david rome fell in berlin i wrote a. book people were throwing their arms around each other and hugging each other you didn't know them but you had them anyway it was pure emotion. and i cried too i saw that and when i look at the pictures today i still get teary eyed. i don't
10:51 pm 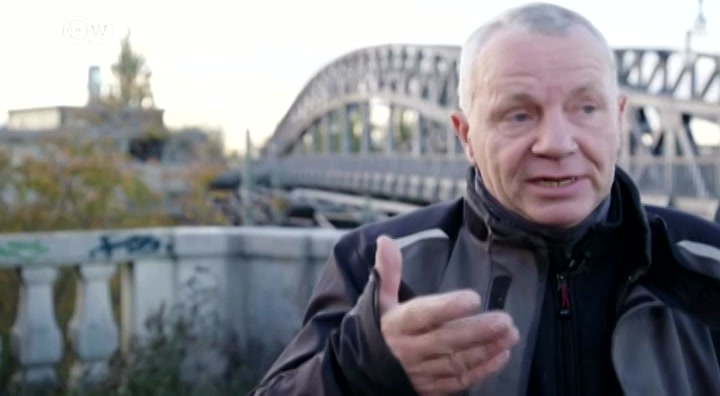 think someone else can truly understand what every person there was feeling so 53. for 41 year. germany was a divided country from 1961 until 989 the wall even split the city of berlin into the western half was part of democratic west germany the eastern half belong to communist east germany and it guarded its borders zealously anyone who tried to escape was arrested or shot but in spite of all the restrictions imposed by the state many east germans were able to find fulfillment both professionally and personally like graphic artist that left him by design movie posters for east germany stayed on film distributors. until the wall fell he worked for us for the only film distributor in the communist east his book more art than advertisement contains reproductions of old east german film posters showing how graphic artists
10:52 pm 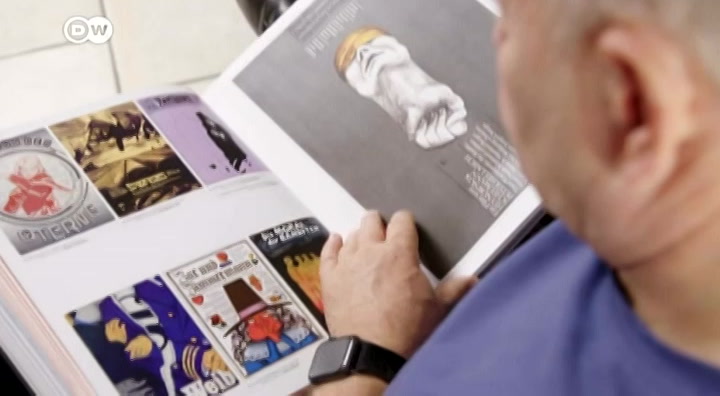 could find creative freedom within an oppressive system as an addict a tool for me it was a dictatorship and i was constantly exasperated by it out of a need alternately it didn't affect my work so strongly that i felt uncomfortable in my work. there i was frantic. but the berlin wall and forced tight restrictions on east germans freedom of movement freedom of expression was also limited by the state with its censors and spies. that all changed on november 9th 1909 penfold heard that the border to west berlin was open at the bornholm my bridge he and his wife were among the thousands of east berliners who flocked there to cross over. on the other side west berliners came to welcome. architect christiane coonan who was among them 30 years later the 2 men still remember that fateful night when we met and i asked if you'd like to come to the co 1st shopping
10:53 pm 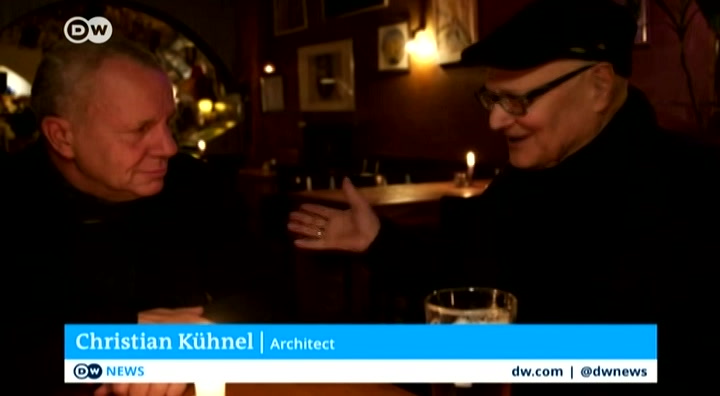 . out of east germany and into the west if only just for one night thousands of revelers flock to west berlin. it was an experience that changed lives and bound strangers from both sides of the world for ever. telling these stories still stirs something can make it words fail me all suddenly tears come to my eyes . that's how emotional it was. meter. culture itself can be a concept an object a custom or even a trend but in each of these cases you need someone to make it happen and in the cultural marketplace to set those trends well the annual culture invest congress brings european cultural providers promoters and investors together and its highlight is the cultural brand award. winner of the big prize was
10:54 pm 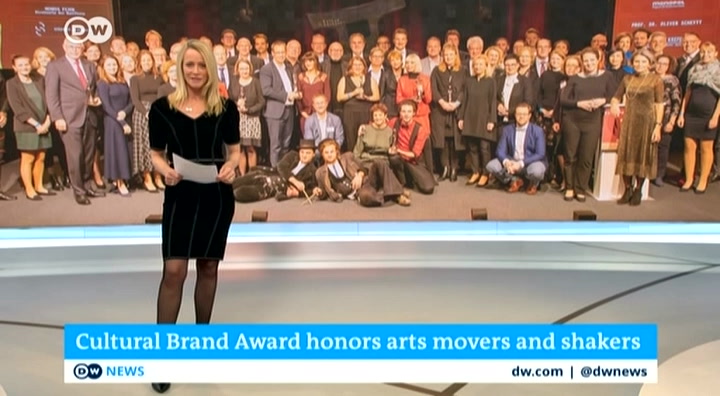 jabs for precisely the jazz trade fair jazz ahead in braman germany. the jazz ahead trade fair brings together musicians and producers it's a place where concert organizers get to discover new acts and plan their next tours . we've still got lots of dreams that we want to make come true and with this prize we've got the momentum to make it happen and it's going to d.j.'s people who make jazz the korea who study it to want to make a living from it have fantastic dreams and what's wonderful is that we can help them accomplish the goals. w.'s head of cultural history spoke words of praise for the organizers of the jazz ahead trade fair for their hard work he noted that jazz and pop musicians in germany receive considerably less public
10:55 pm 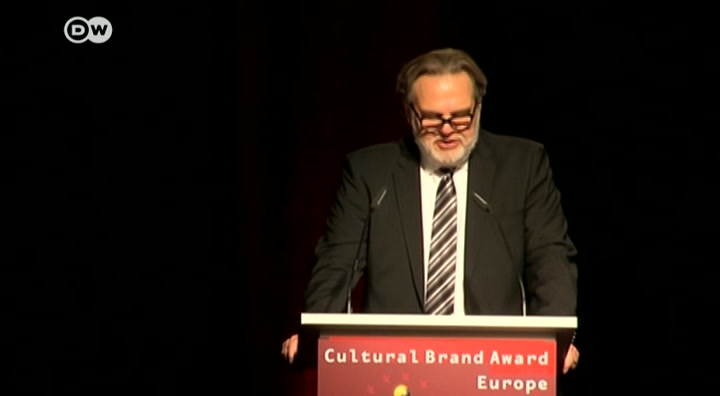 funding than classical musicians. if you compare in germany the public funds made available for classical music with funding for rock. it's $99.00 to $1.00. other countries the situation is different but. it was a surprise victory for jazz ahead in the final round of the cultural brand award it pulled ahead of the state palaces and gardens of baton back and the 100th birthday celebrations of the bauhaus does. ryan academy. the owner for lifetime achievement went to cultural manager oliva shite directed the word valley regions 2010 reign as european capital of culture. hedwig phiona of the netherlands was named european cultural manager of the year
10:56 pm 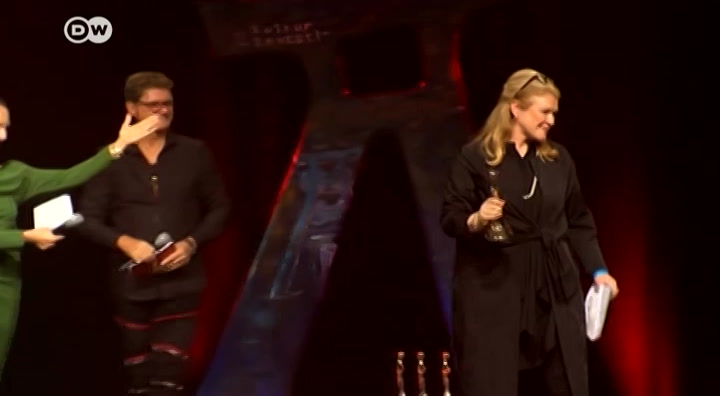 she organized this manifesto of the european nomadic biennial which celebrated its 12th edition last year in palermo and hopes to soon bring manifesto to eastern germany. some of the city 7 a remarkable history to have a very complex contemporary but maybe a remarkable future i'm looking in 2 days the prize for the european trend brand of the year went to the shtick live orchestra of berlin the international including horn player ury demarco it means no conductor paid improvise contemporary music with classical instruments. v.z. we'd like to see how that approach affects us and how we can play the material in an associative and playful manner a result is an incredible authenticity and
10:57 pm 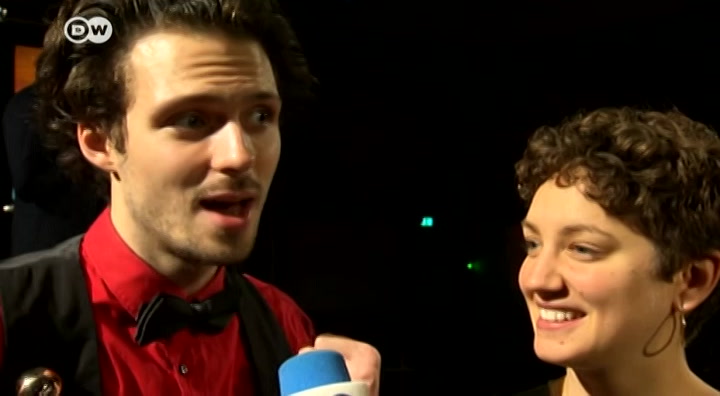 a readiness to change things because we are totally behind the work and can perform it with total passion. the new prize winners can be sure that their cultural brands will now attract even more attention than before. and with that our time is up so until we meet again all the best from us here in berlin go well. thinking.
10:58 pm 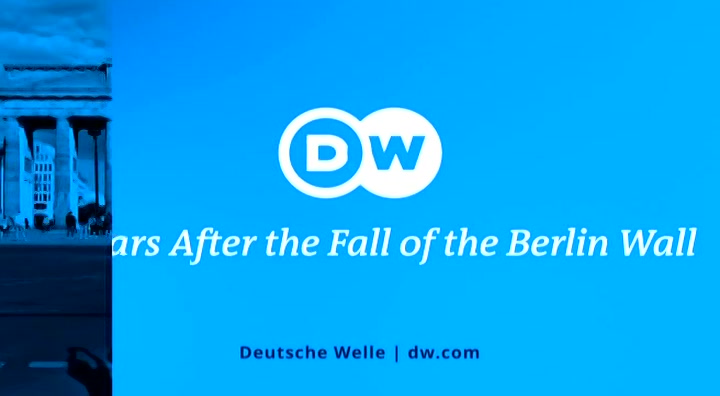 through the point of strong opinions from clear positions international perspectives it's 30 years since the fall of the berlin wall germany is celebrating but the mood is to changed with dismay many in eastern germany say they've been left behind and feel like 2nd class citizens so what's gone wrong find out going to the point. in 30 minutes on g.w. . welcome to the but is the game here for d.w.i. . triplets to talk about since the list goes on coverage. 3 more. slowly have passed let's have a look at so many of them from the leaf book so you don't want to miss this. stuff
10:59 pm 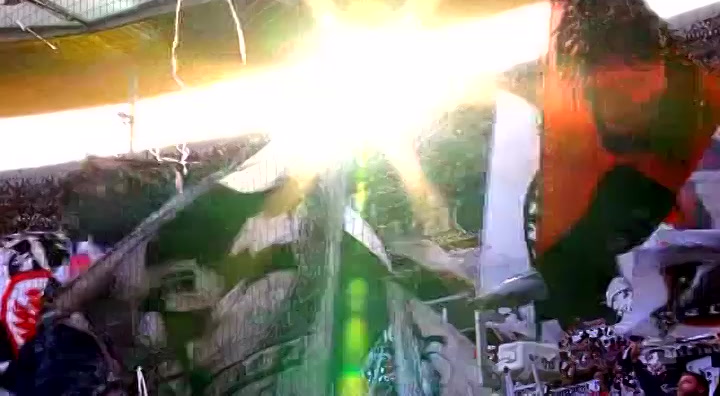 if you come to w. their home isn't calculable. their egos consentual. their rivalry deadly. 3 princes. cuckoo dream of the arab world. they're there for power and boundless ambition have crushed the middle east into a grave crisis sunny. the wife of princes of the gulf starts nov 27th on t w. frankford help international gateway to the best connection self in road and rail. located in the heart of europe you are connected to the whole world. experience
11:00 pm 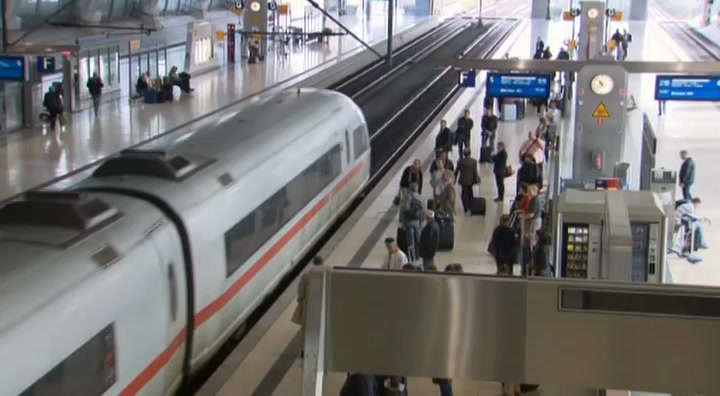 outstanding shopping and dining offers and try our services. be our guest at frankfurt airport city managed by from bought. this is the news and these are our top stories from a brazilian president the with sickness lula da silva has walked free from prison his release was ordered by a judge after a supreme court ruling that inmates who are still appealing convictions could be freed although was jailed on corruption charges in april last year. in hong kong antigovernment protesters are mourning a student who died from his injuries events leading up to the incident are still unclear but it's.
left
right
email Borrow Program
tv