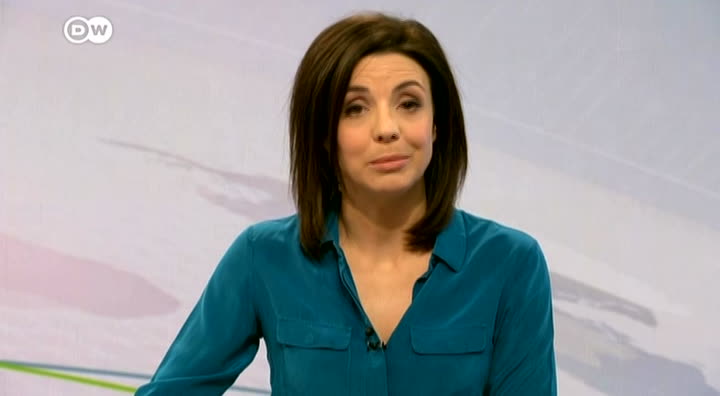 30 years ago of a city of lenin the lives and destinies of millions changed by burning war before to fight back to the divide with the communist east from the west of the city finally fell and set in motion the collapse of communism in eastern europe some even described it as an end of history but today as germany remembers the fall of the wall it's also contending with the resurgence of the far right and with divisions placing its alliances so 30 years on from november of 1989 i'm going to medical a sounded a note of caution defend democracy and freedom she says don't take them for granted i'm phil gayle in balance and this is the day. in the i would like to honor those who were killed near the wall because they
5:03 am 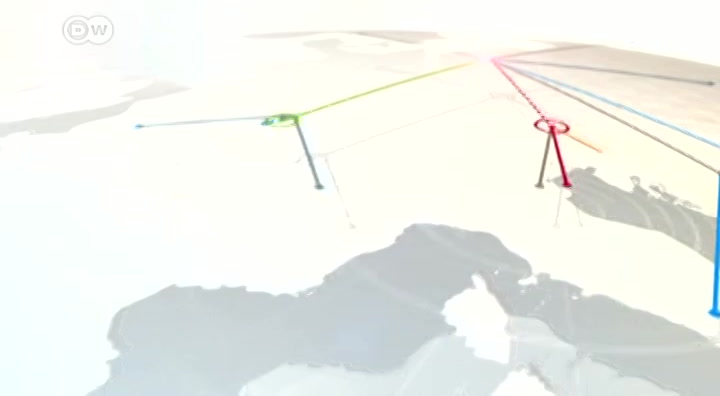 sought freedom. i honor the 75000 people who were imprisoned because they attempted to flee east germany. this place and this day remind us of the great historical achievement. so after decades of living with a border patrol by ruthless armed guards under orders to shoot on sight anyone who tried to escape the east freedom which had seemed unimaginable in berlin i arrived in november 1989 and we just walked right through without being stopped it was fantastic and what my mother and my father over there can i go over there and see my parents yes. welcome to the. day germany has been marking the 30th anniversary of the fall of
5:04 am 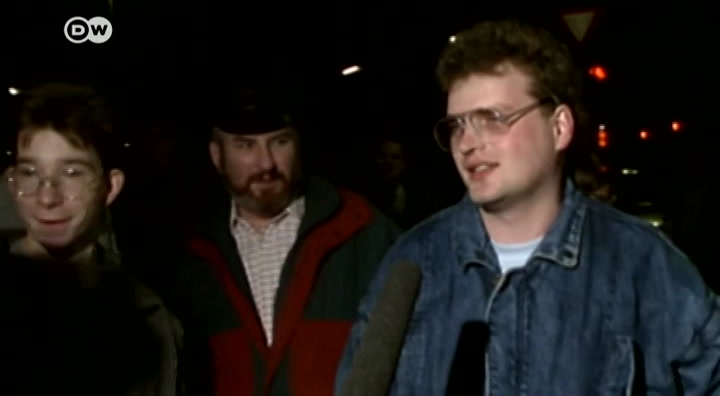 the burden war with events across the capital and the country german chancellor i'm going to medical and other european leaders took part in a ceremony but now a struggle and one of the last stretches of the war remains on the chance for war and europeans not to take their freedom for granted. ceremonies in the heart of berlin commemorate the 30th anniversary of what's called the peaceful revolution. today this section of the wall is a memorial site but 3 decades ago it separated east and west germany and this symbolic location is where the official memorial celebrations are taking place. the iron curtain is now history that's what these young people say they are from the so-called visit grodd countries poland the czech republic slovakia and hungary
5:05 am 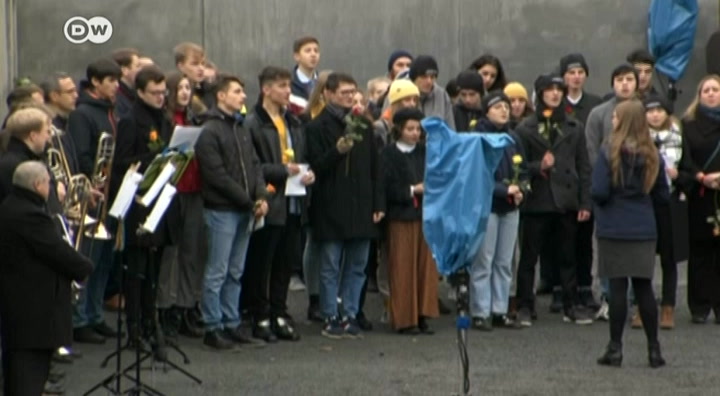 their message 30 years after the fall of the wall europe stands united and in his speech german president. emphasized the role of east european countries before the fall of the wall the openly demonstrated for more freedom. or noted moot or not in fighting that's been born without the courage and desire for freedom that motivated the poles hug ariens czechs and slovaks the peaceful revolutions in eastern europe and german reunification would not have been possible. guns on its way this place and this day remind us of a great historical achievement. and they remind us that today we europeans are united in joy. so and so i'm going to
5:06 am 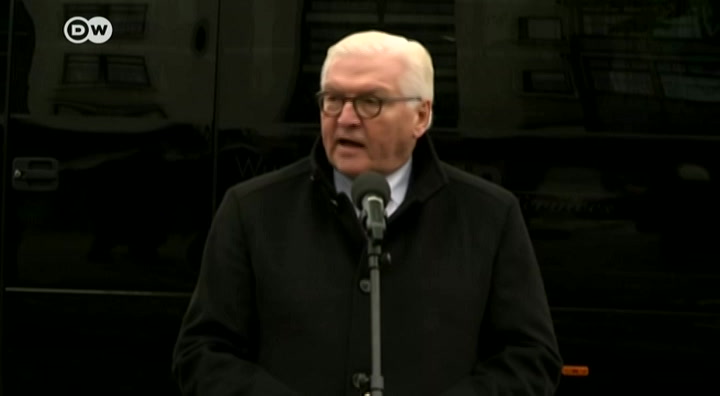 find the chapel of reconciliation was built on the former death strip where the east german government demolished a church 4 years before the wall fell this chapel hosts regular ceremonies in honor of those who died during germany's years of division. is the in the on dimension i pay tribute to those who were killed near the wall because they sought freedom and i pay tribute to the 75000 people who were imprisoned because they attempted to flee east germany and i did november the 9th of november is a day of destiny a day of horrible but also joyful moments in history that reminds us that hate racism and anti-semitism must be fought and show us and. then a moment of solemn thoughts for the victims of a divided germany. so let's now take a closer look about night 30 years ago when they. began to crumble.
5:07 am 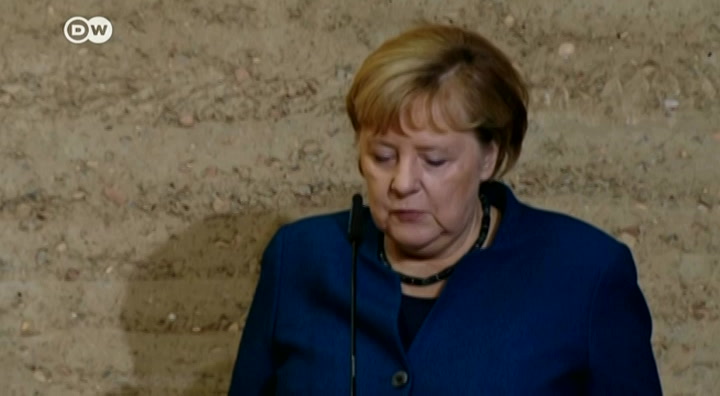 the world must go what had seemed unimaginable became true on november 9th 1989. after 28 years a chink in the wall and suddenly immeasurable freedom. when i'm with my mother and my father over there can i go over there and see my parents yes. good luck. good luck. that does evil and no one dreams this could be possible in their lifetime and the sushi it is too good to be true in new york millions have waited for this moment. so you've never been to the west no never what sort of feeling is that brilliant indescribable the atmosphere in the joy you can't believe it my it's crazy. laws an
5:08 am 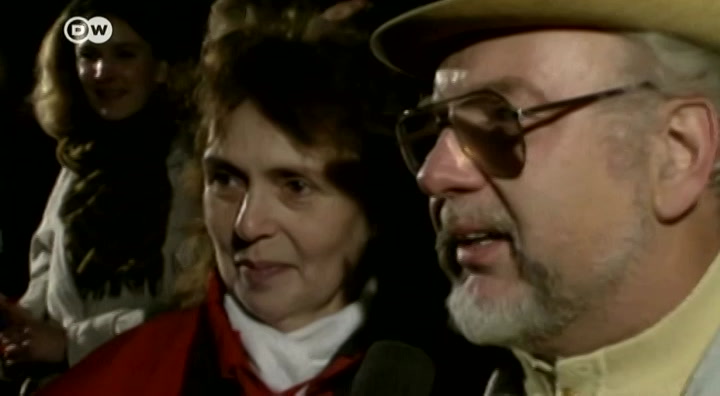 . 11 30 pm at berlin's bornholmer strasse a transit point the borders 1st began to open here freedom had finally won. now it's off to west berlin. destination the glittering came down from a not. just and we just walked right through without being stopped it was fantastic i thought we were i mean i just went over with my id i asked if it was free yes they asked what are you going to pay with. money and what did you do here in west berlin no f. no left no i just went over stood there had my feet on the ground that's pilot that's my just to see if it's true or not stand because now i can go back and forth at any time it's fantastic leaders were surprised and overwhelmed form an incumbent
5:09 am 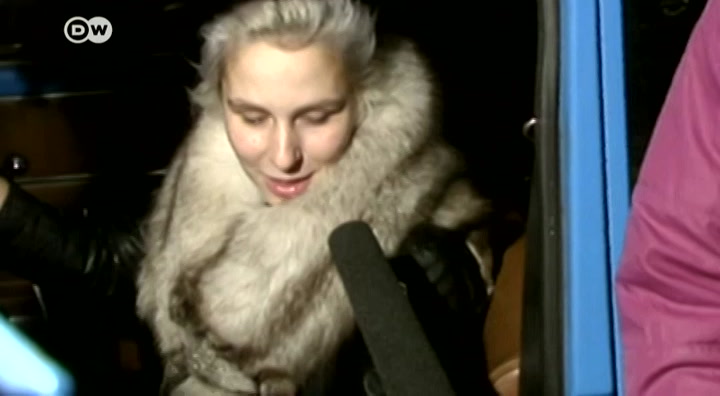 man as a prime demba gate. they spoke of the happiest people are the united europe and fissions and ideas. leave the peace somewhere for the museum. of the people must be able to meet each other again freely not just for a few days but only weighs. one year later east and west germany or united but bitter memories of decades of separation and a system of oppression remained. so let's go to berlin's of brandenburg gate where today's main celebrations took place and joined the w.c. chief political editor became a welcome mckayla so a lot of joy we were seeing there in berlin 30 years ago is that carried over to today. well absolutely i mean you can see behind me that things are wrapping up
5:10 am 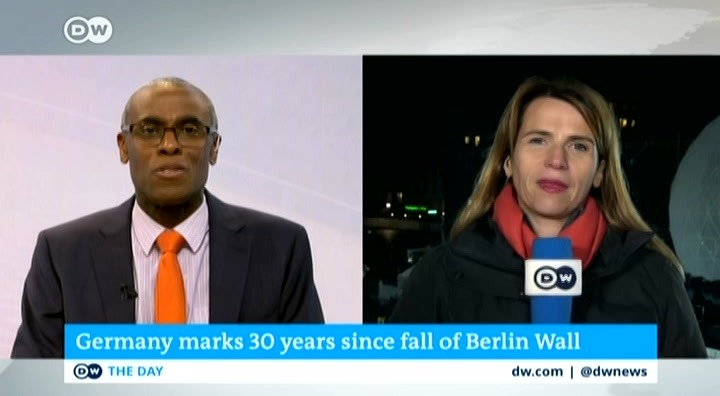 here brandenburg gate it's getting late but there was a day that was full of commemoration also of those victims those rather serious moments where it wasn't clear whether this would be a peaceful revolution a tall those broken lives both through division but also through reunification but overarching all of that a big celebration a big party down here brandenburg gate he so became the symbol of division but also the symbol of germany growing together again and i'm not hearing you mention the war was cut through where you're standing now so how did brigade become this symbol of unity rather than division. where i'm standing right here that was west berlin you can see brandenburg gate behind me that was already east berlin and it was technically right at the heart of germany of east germany back then right at
5:11 am 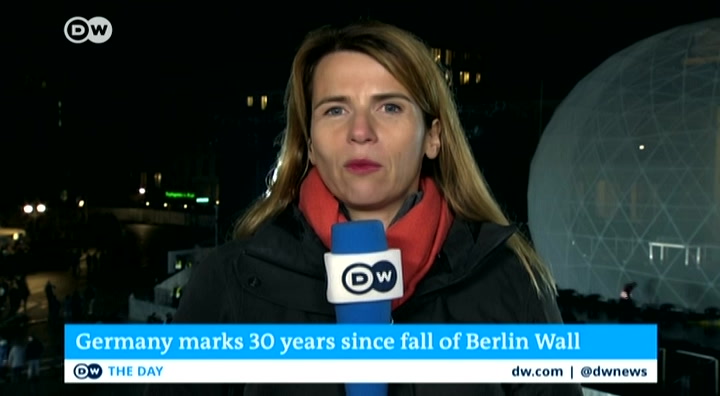 the heart of the former german capital and yet it was pretty much a no man's land a wall was cut. right thruout death strip right through it this is where warsaw pact and nato really stood opposite each other this was the hard front of the cold war and once that was overcome it now is again right at the heart of germany something that seemed simply not possible 3 decades ago. so the peaceful rallies leading up to that this decision to open the border crossings do if you wouldn't mind take us through the lead up to november 9th 1900. yes one hindsight the whole year led up to it but the weeks before saw those key demonstrations in the city of light think on the 9th of october where 70000 people defied well actually their own fear of the or storage fees peacefully went to the streets there was no violence either from the protesters nor was
5:12 am 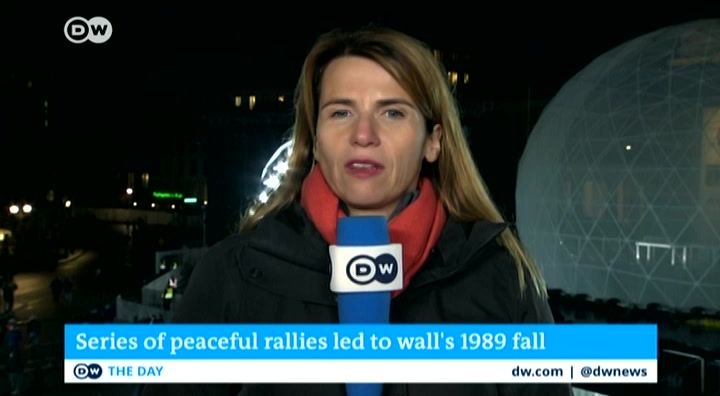 a bullet fired or any kind of violence from the side of the police the former communist regime simply overwhelmed with this situation at a loss of what to do that is seen as a key moment that an able to this peace for revolution then you saw on the 18th you saw in a hanukkah standing down as leader of east germany and on the 4th of november there were more than a 1000000 people just 5 minutes down the road from here on alexanderplatz in the east with this large demonstration on alexanderplatz with speakers from the communist regime vowing to change that change was possible within that structure and nobody there had any inkling that only 5 days later the wall would fall so coming today here we are now in the united germany barrel still political divisions
5:13 am 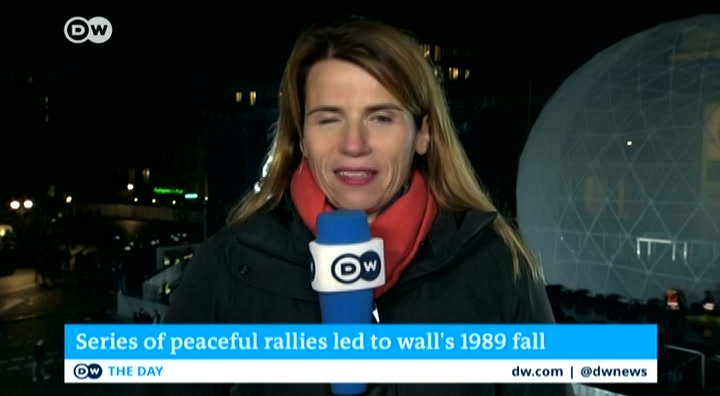 between the former east and west and some say very increasing why. well there are political and economic divisions and i think those are catching up with german politics i mean we more than just one hint at the far right if he was particularly strong in those eastern states i don't think there is a simple answer to this and nobody's really claiming that but let me just throw a couple of numbers at you 90 percent of germans polled just last week believe that german reunification was a good thing to happen and yet almost half of east germans still feel like they're being treated as 2nd class citizens that doesn't sound like a united country it isn't it is technically on many levels but there's still a lot of catching up to do and there's a lot of talking and understanding each other to do and this is something that also the berlin mayor who spoke here called for that the freedom of today also all the responsibility to defend the freedom of the future there's
5:14 am 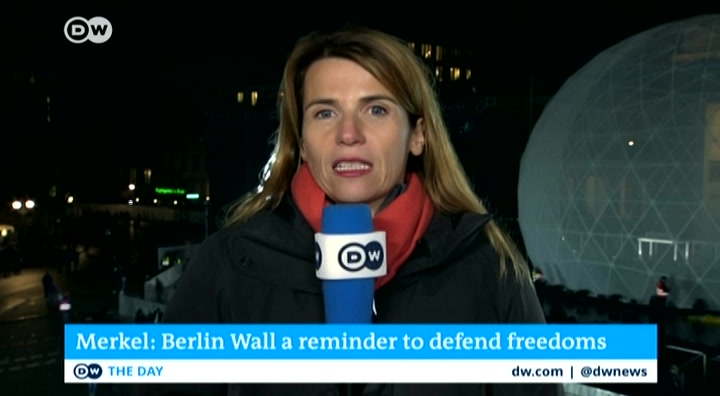 a ground words but there's still a lot of nitty gritty understanding to be done between east and west germans to talk to you thanks for joining us probably tell you when time chief political editor. of the brandenburg gate of the day is almost done the conversation continues online you'll find us on twitter at t.w. use or use a hash tag today i'll leave you now with more of the 13 year celebrations of the fall of the berlin wall. perhaps.
5:15 am 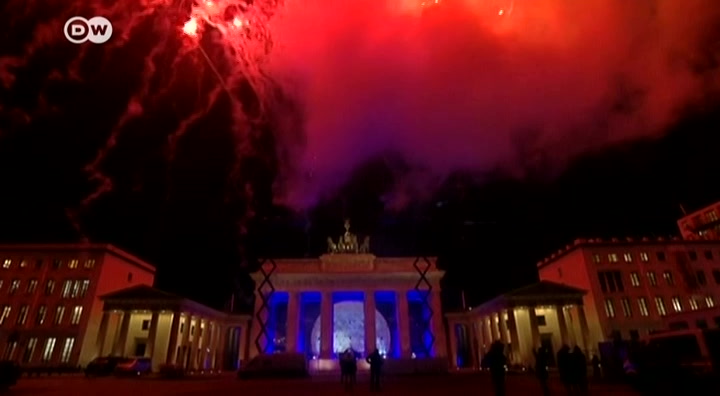 some of the adventures of the famous naturalist and explorer. to celebrate clicks on the front of the world's $250.00. 4 again on a voyage of discovery. expedition in board on a deal. with the thing about the stars in the sky.
left
right
disc Borrow a DVD of this show DVD
tv