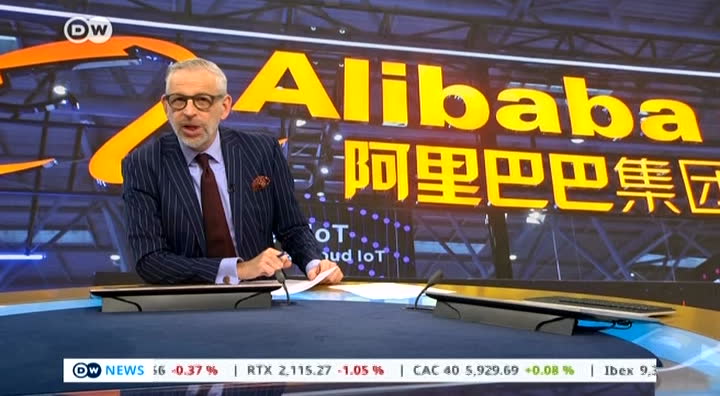 peel shares in chinese e-commerce giant i mean baba have surged and it's hong kong trading dead one of the year's most and to support install for things the company which is already traded in the u.s. raised more than $11000000000.00 in its secondary listing on tuesday 8 c. . b. shares of ali baba surged almost 8 percent in the 1st few minutes of trading the initial public offering of the online retail giant is the world's largest so far in 2019 the secondary listing in hong kong gives access to chinese mainland investors it also means that shares could be traded almost around the clock now between hong kong and new york. was on kenyan saw the occasion of ali baba's 20th anniversary we have argued in an important milestone which is to come home come back to hong kong for the listing.
3:46 pm 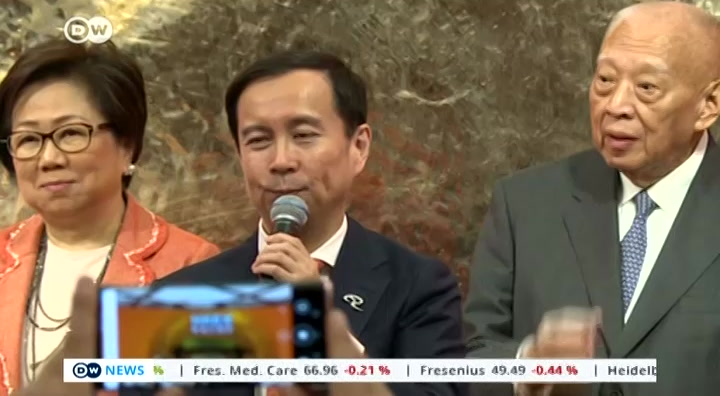 this ali baba celebrated its founder at the event jack ma who started the company in his living room. ma listed ali baba at the new york stock exchange in 2014 and became china's richest man back then ali baba said it planned to be listed in hong kong as well now the time has come. i'm also grateful that they choose to calm despite the difficulties despite the challenges that we are going through here in hong kong. ali baba called the listing a vote of confidence for the city hong kong has been wracked by sometimes violent pro-democracy protests for months the protests and the u.s. china trade war have sent the local economy into recession. let's bring in craig he's a senior market unless they're the one that joins us from london craig why is this
3:47 pm 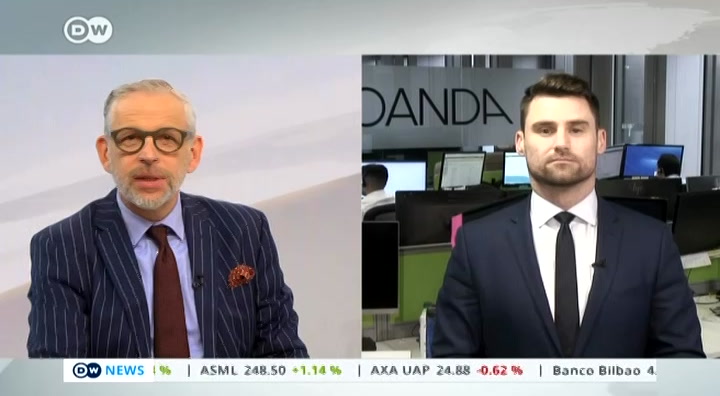 thing so significant for alibaba. well i think we have to remember that this is actually the venue that alibaba want to list all those years ago but you to regulate 3 concerns it had to consider the shins and of course new york is not exactly about alternative option but in terms of why you would want to let's now let's remember this is an extremely profitable company but it does give it extra revenue to continue to invest in the firm and it also gives it access to a different pool of investors a very asian which is its home market so i think this is a very beneficial listing for one which it always had in mind or bit maybe a few years later than initially planned very beneficial not only for. this not totally unimportant for hong kong as a financial center on the. the timing of this is hugely significant for hong kong which spends 6 months now talking about protests in the city and about the escalation in terms of they political crisis there so to be talking about it for a positive stumm point hong kong giving is showing those that it's business as
3:48 pm 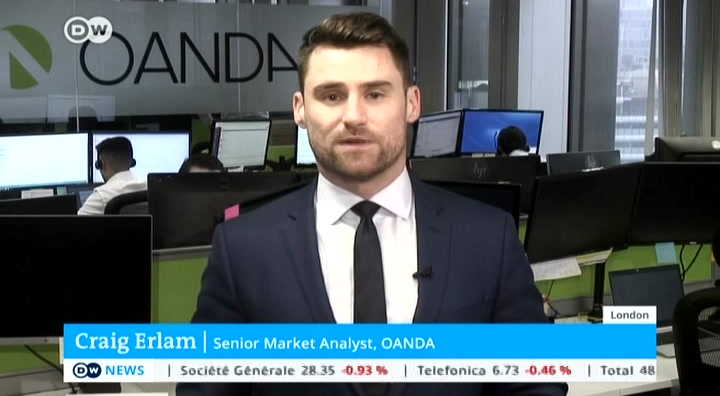 usual that it can still attract those big names we have to remember that it's not over the last few weeks in particular questions have been asked about the future of hong kong a financial district well today it showed that it's still a hugely important financial district around the world and has continued to it's going to continue to be for decades to call. from in london thank you very much for joining us. bitcoin investors need nerves of steel the much hyped crypto currency has fallen to another 6 months low and china plays an important role in the current decline that's in part because china has announced plans to take a harder stance against crypto currencies altogether but bitcoin has always fluctuated wildly in the past harping on doubling in value within a few weeks is not uncommon clearly the currency react strongly to good news and
3:49 pm 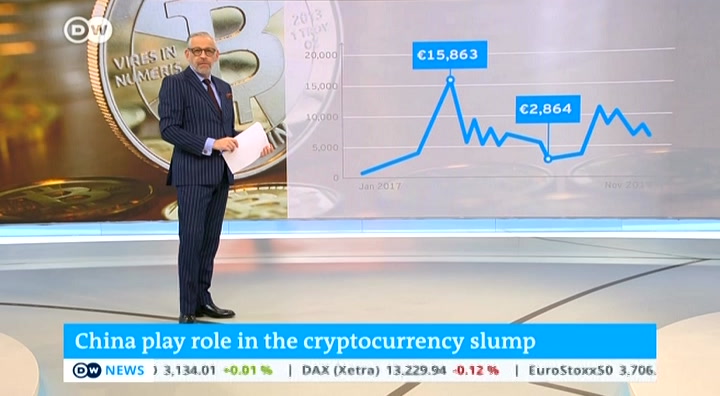 bad news which is what's been happening recently when china's president xi jinping spoke out in favor of strengthening block chain technologies saying more should be invested that boosted bitcoins priced but now that china wants to take action against bitcoin the price has again collapsed let's bring in our financial correspondent early by standing by in frankfurt for us who only it sounds like investors really got confused about things a commons there what did they get or draw and what did they get wrong. yes i think they got it wrong that he meant that china was going to look into bitcoin and cryptocurrency is like it to adopt methods of payment but one actually knows that the chinese yes they are working on a digital currency but certainly one that is controlled by the state and not
3:50 pm 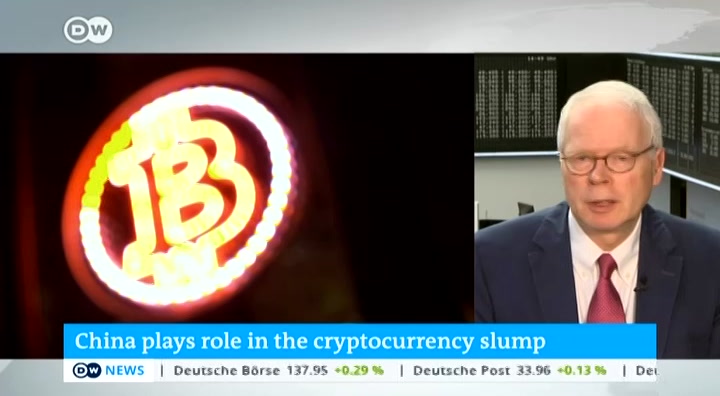 non-state controlled like like bitcoin one knows that the chinese are totally against this and other people who are responsible for real currencies ones that are bank by central banks that's the definition of a currency that there's someone behind it that accident guarantees that they're also not enthusiastic by non-state controlled currencies floating around there it's not just a question of money laundering or criminal activity that's behind it but there's of course the possibility of destabilization of financial markets and us of the financial system with non-state controlled investment vehicles take hold i think what she jinping was especially talking about was looking into and developing further the block chain technology behind. bitcoin and in the beginning people equated bitcoin and block chain as one unit but in fact one bitcoin is just using plot change and lots of people are looking into that interesting technology and
3:51 pm 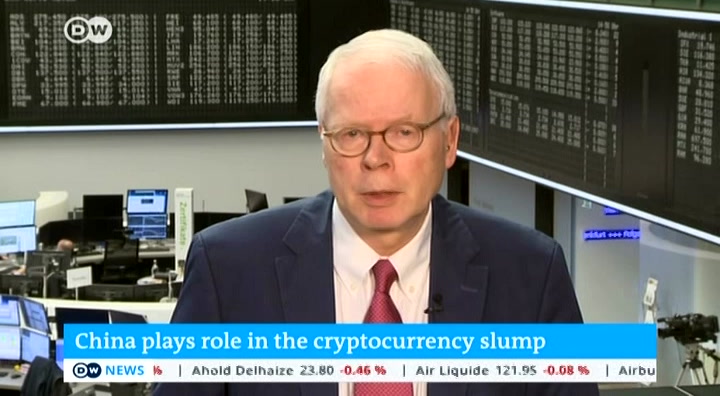 that really has the potential to change the financial world. skeptics doesn't this rollercoaster and this volatility all known one remark by doesn't actually mean it's. a big call another couple cons is not a safe bet. yes they are not a safe bet you're right because there's nothing really to back it except to self to find a definition by bitcoin of what makes it valuable it is a valuable tool for criminal elements it is a valuable tool for people who are a lot ideologically against state controlled money and this huge surges or to tumbles not there's hardly a serious investment vehicle out there which shows this oh so many times over such short periods of time. only once in frankfurt thank you. dutch utility and echo is to be acquired by a consortium comprising japan's mitsubishi corporation and electric power the deal
3:52 pm 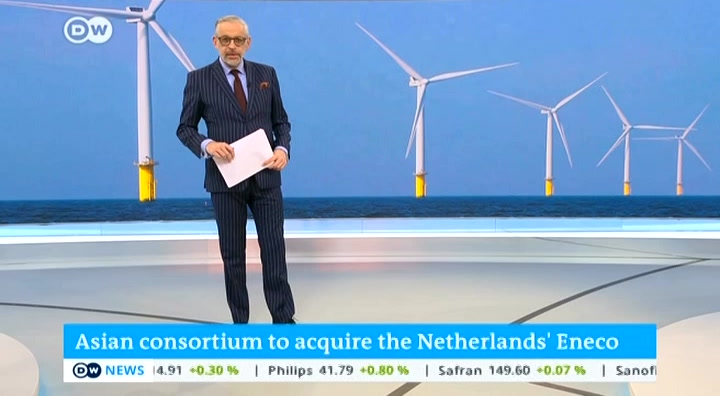 is valued at full 1000000000 euros and acoa is owned by $44.00 municipalities in the netherlands and is one of the country's largest energy companies and it goes specializes in renewable energy and has about $6000000.00 customers the netherlands belgium and germany. and also some of the other global business stories making headlines today german comicality plans to slash 9 and a half 1000 jobs in germany in the next 5 years it's part of a massive restructuring plan to save billions over the coming decade the job cuts are to be achieved through an early retirements he. said it would continue to hire in areas such as electrical billet and digitization. german economists are expecting a strong holiday season and its monthly consumer climate index german market research group j.f.k. is predicting an increase in consumer confidence of just over one percent for
3:53 pm 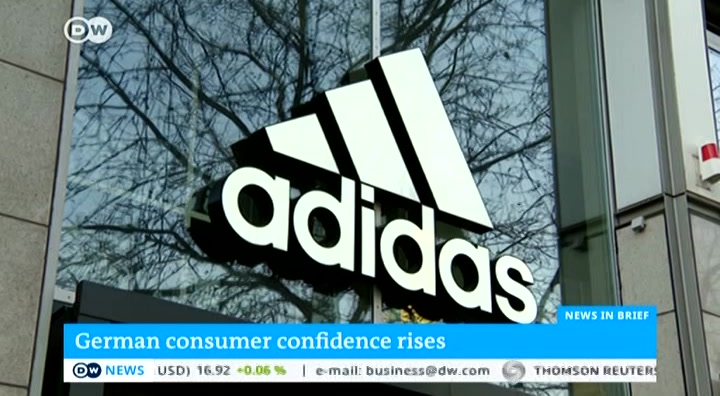 december but the christmas uptick only goes half way to correcting last month's retail slump. u.s. state of texas has dropped its opposition to the merger of mobile phone companies sprint and t. mobile usa and asking a settlement that would stop them from raising prices for 5 years 14 states and the district of columbia are still planning actions to block the $26000000000.00. mexico fell into recession during the 1st half of this year revised data shows the economy shrank before flat lining in the 3rd quarter the figures come one year after president under arrest manuel lopez obrador came to power the former saying gross. now what to do with a set of priceless 18th century jewelry stolen from one of germany's most iconic museums monday's heist in the city of dresden is said to be worth up to 1000000000
3:54 pm 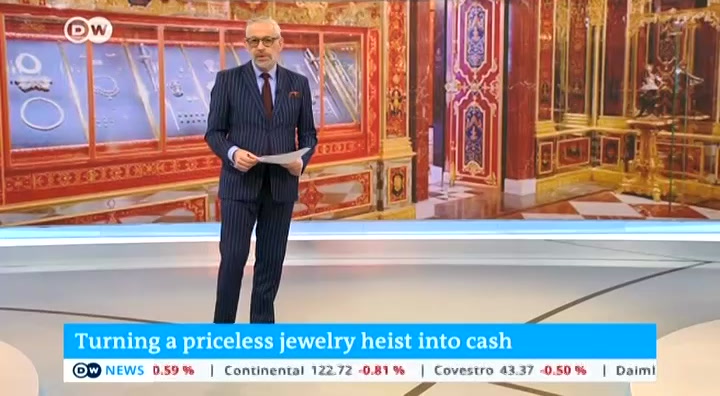 euros the thieves are unlikely to try and cash in on the pieces any time soon though because the collection of the royal house is far too well known. once owned by the 18th century royal family these sets of diamond studded jewelry have been described as priceless they're part of one of the biggest and most unique jewelry collections in the world and now they're in the hands of criminals in just minutes they cleared a section of the display case in the green vault these pictures from the surveillance camera captured the thieves in action exactly how many items were taken is still unknown but the jewels the river size and purity rarely seen on the market anyone trying to sell just one of them at auction could expect to be arrested immediately auction houses and dealers all over the world will be scrutinizing any standout pieces and their owners the pieces may get melted down to
3:55 pm 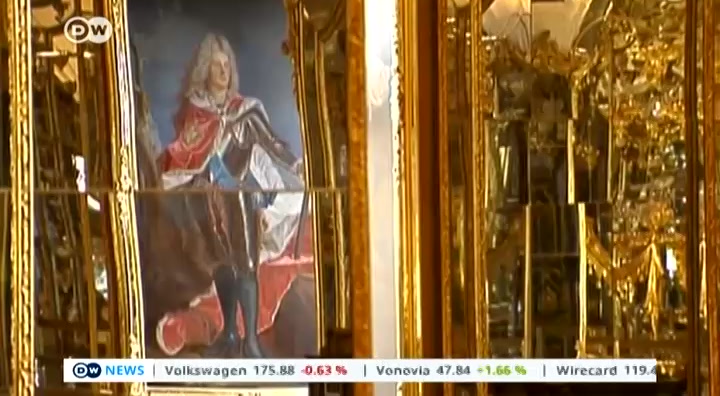 release the precious stones which would add insult to injury for those who were robbed. these ensembles have stayed together they have significant cultural historical value there's nothing else like them in the whole world and the individual pieces in the materials are nothing in comparison to the significance of keeping the ensembles in the town but also on the. market experts are now eager to see when and where the 1st stolen pieces turn up in circulation and whether or not they get recognized. what exactly the bugs have in mind for the stolen treasure is a mystery there is a growing market for and seek and one of a kind pieces about stolen goods of that reputation to sell earlier we spoke to the younger donahoe she's a managing director at the auction house here in berlin whenever we have
3:56 pm 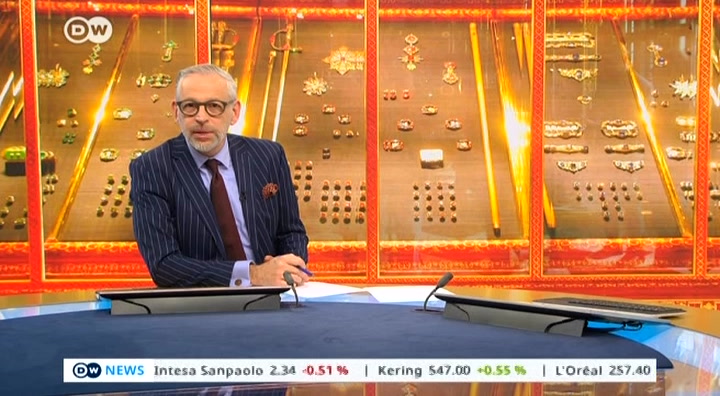 a customer offering an artwork we do something very typical it's called provenance research we find out where has been from the moment it has been made to the moment we would sell it and then we get help from the register which is a database and it has all the stolen artworks in it so we can look them up and of course the police does help us too with everything stone. well that's it for me on the business team here. more business and features photo website e.w. dot com slash business thank you for. right after this.
3:57 pm 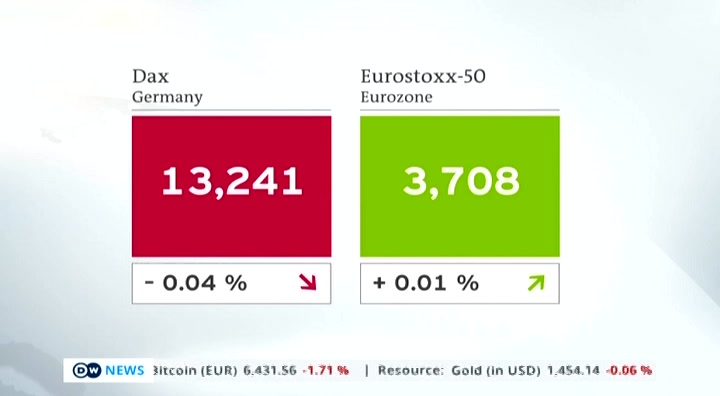 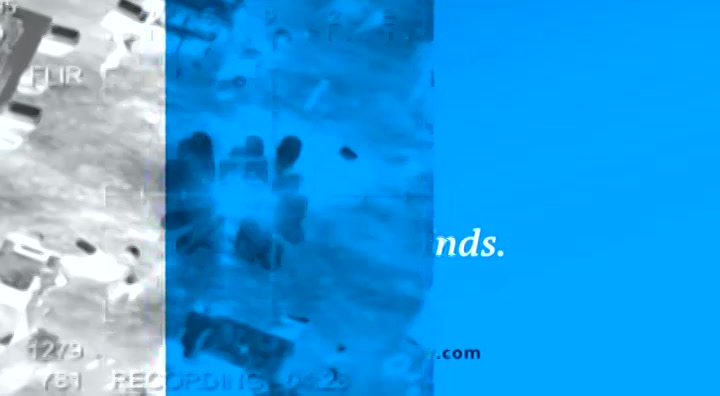 sucks balls favorites. 6. 166 plenty of emotion 6 the best game day kuku 30 minute. what secrets lie behind this one. discover new adventures in the 360 degree. and explore fascinating world heritage sites the. w and world heritage 368 getting out now. welcome to the what is the game here for design.
3:59 pm 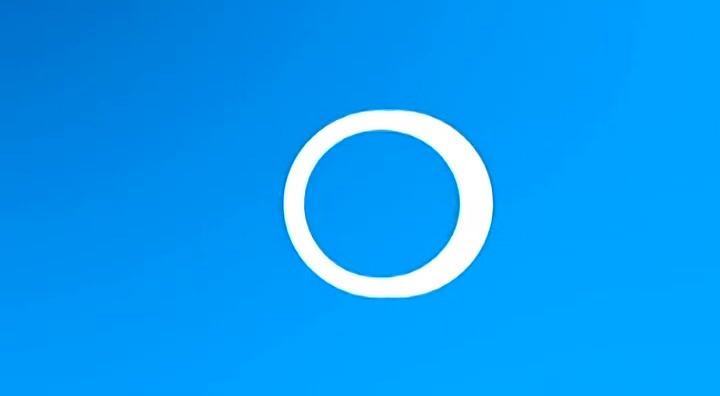 this is all about the. place. that's the law so you want. to get. the lead. slick. carefully. to suit your needs to get. discovered. the a. subscribe to the documentary to.
4:00 pm 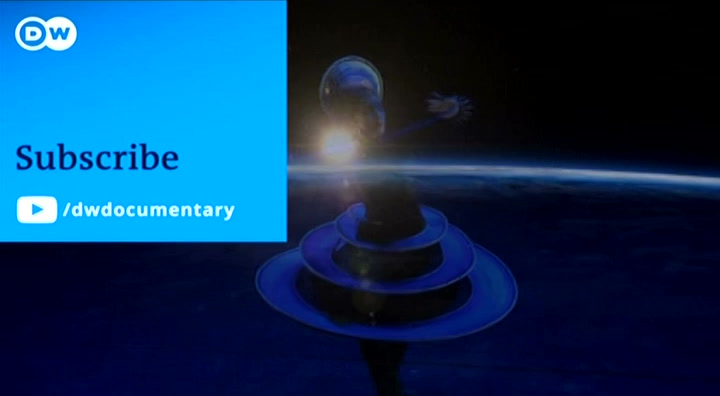 play. play . this is you know we knew it was the. from berlin thousands of farmers roll into the german capital in their tractors. they are taking their beef about new regulations to the german government they've driven in from every corner of the country to protest environmental rules they say will threaten their very livelihood it's also coming up a manhunt is underway for heists the use no trace of the intruders as of yet who staged the biggest burglary in post-war germany in the city of greece and now.
left
right
email Borrow Program
tv