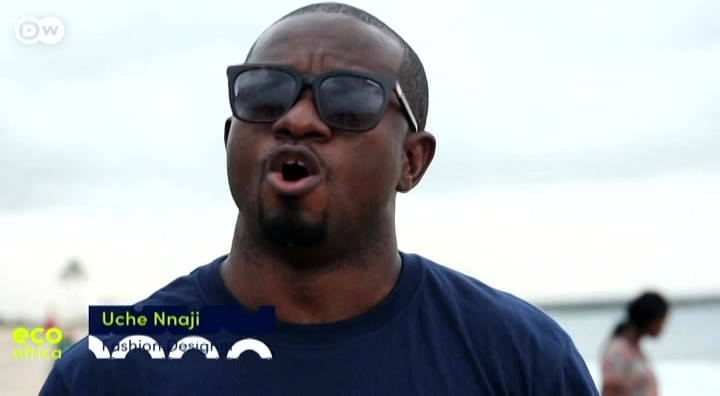 what about this but that's. what. my facts are smaller run because someone doesn't like. an estimated $450000.00 metric tons of trash are dropped in the lagoon and on the beaches every year. the activists hope the government in lagos will step in soon to do more than it's doing now and that way the way syria will be cleared every day. mongol largest seabirds and they are one of the most threatened families of birds on earth albatrosses feed on squids fish and kriol so it's not surprising that they are attracted to large fishing vessels that troll the oceans and while maybe too good to resist the boats are actually more of a curse and a blessing to these majestic creatures us.
4:46 pm 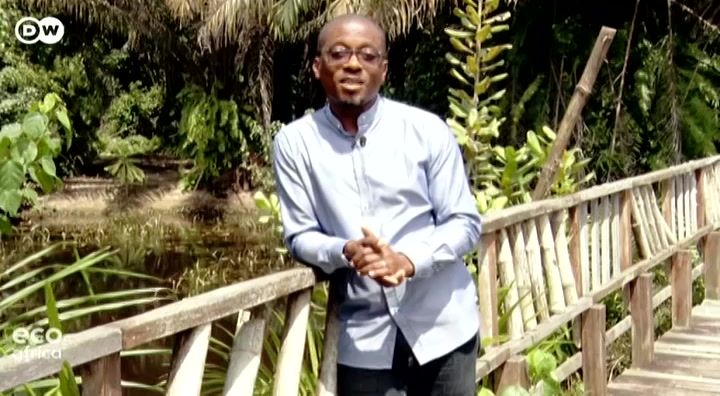 with a wind span of up to 3 and a half meters the wondering how the trust may be the most majestic seabirds in the southern hemisphere and one of its most endangered species. on the french causing island is an archipelago in the southern ocean only weimann his team to quit the birds with transmittance since last autumn they've been tracking the flight of the albatross is why miss king has been fascinated with the sea birds ever since she was a boy. albatross is flights of 70 to 80 kilometers an hour over stormy seas without flapping their wings they use the winds to get around but it's true there is something that just can fantastic about the flight of the albatross
4:47 pm 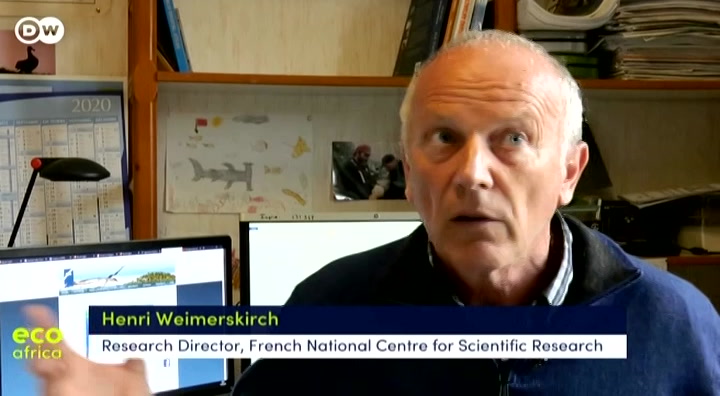 when you go to the sea every owner tholen just dreams of catching a glimpse of one. such encounters are increasingly rare because the number of wandering albatrosses has shrunk dramatically in recent years. research's estimates that there are only some $25000.00 left worldwide albatrosses often follow boats in search of food. for 1st almost sorry when i was on the boat taking those over to the crows at islands the bird just a bit of nowhere on the sea was choppy and we saw the albatross broach the boat pass over it a fly along side the vessel is observe those and then vanished again into the sea. the birds mainly follow fishing boats unfortunately many fisherman cast kilometer long lines equipped with dozens of hawks while trying to take the bait albatross is often swallowed the hooks and die a painful death the boats they usually unlicensed and don't send out the required
4:48 pm 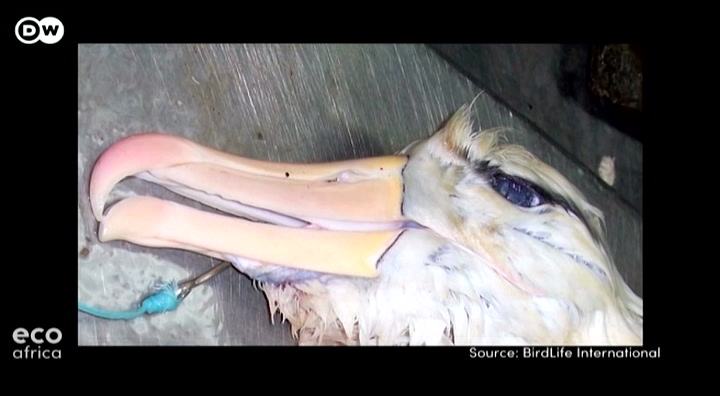 automatic identification signals they also don't employ safety measures like weighted lines which can be immediately pulled down far below the water's surface marine biologists are concerned. about is not a problem with international waters is their rights free zone and international organizations don't have the legal instruments to force these boats to stop their own authorized fishing or. so off the women's cations his colleagues launched their ocean sentinel research project to find another way of combating illegal fishing they've now fitted $170.00 birds with radar transmittance which can even track down boats that aren't sending out the required signal. this here is a transmitter you know it has a g.p.s. on turner which allows it to locate the exact spot where the radar was detected. the another and tell it transmits the data directly to us via satellite. the
4:49 pm 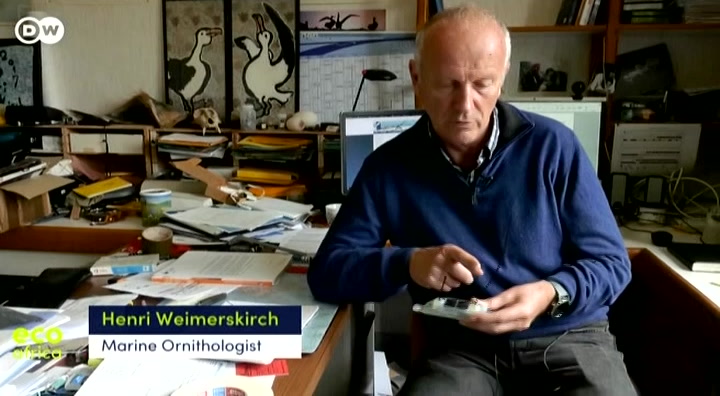 scientists compared the data gathered by the birds with that from authorized fishing boats they found that around 30 percent of the vessels out at sea not permits the research is saying there are indications some of the boats saw sailing under chinese and spanish lacks an accusation that spain's director general of sustainable fisheries categorically rejects the basis that we are operating essentially whatever your students that were flying the flag. saying are welcome sure we want sure we all of them and all that we are not a war or off their cities but the ornithologists trust their research best certain that data could help to stop illegal fishing and save albatrosses in the process. just as in many other parts of the world traffic is
4:50 pm 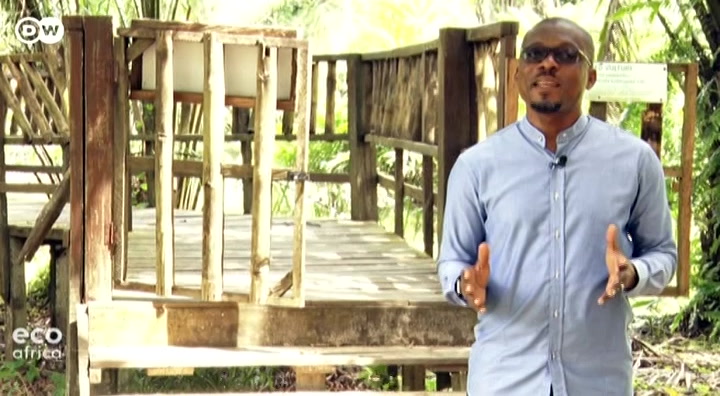 a major problem in africa's megacities some people need up to 3 oz just to get to work never mind all the small delivery trucks that are frequently stuck in traffic jams and it's not just the time wasted is it near to take king as capital nairobi its population has doubled over the last 20 years and the increase in traffic is terrible in terms of cup and emissions and quality but that's just one reason eco minded intrapreneur us us making the switch to in metro mobility. it's still early when leroy miner heads into the public stricken districts of nairobi to deliver fresh projects. he were gets around on a solar powered cargo bike. but he turned. it down do you have a good 50 kilometer and value on a solar like my son they have fun maybe food but the child. could take you up to
4:51 pm 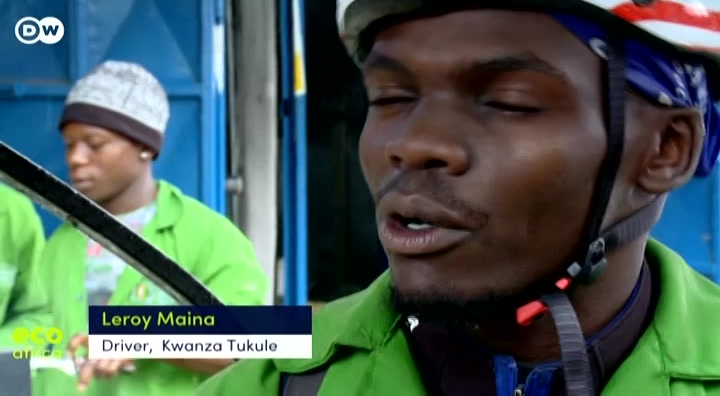 a 100. so that gives you the next story when you sign. the bike to reach a speed of 40 kilometers an hour even when it's carrying a heavy load the solar panel on the reef protects leroy from the brain and the battery keeps charging even in this kind of. leave only works for a local company kook kwanza to coolah. it supplies pre-prepared staple foods to street food vendors in mostly impoverished neighborhoods we want to be sustainable that's the number one driver but also we want to be economically sustainable so that we are able to produce products that are affordable for our customers who are poor in order to do that to find a more efficient to use clean energy the sort of bikes that we use we don't pay any fuel for them and they're able to carry more cargo to buy the electric cargo bike
4:52 pm 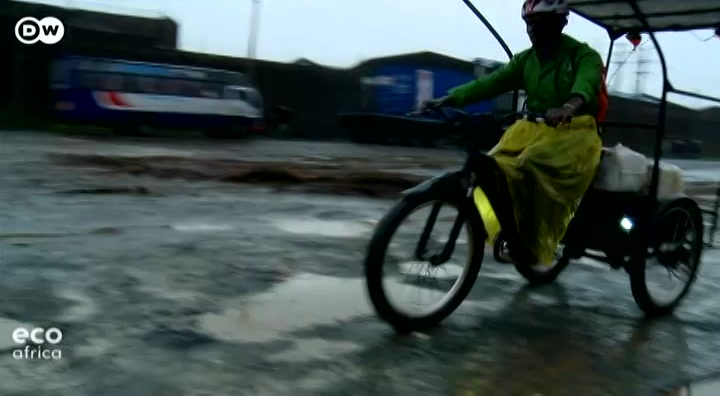 was developed by the start up so a cycle sustainable mobility is wonderful because it's one that's good for the environment especially in kenya and in africa where our population will grow muscly over the next 20 to 30 years so the environmental case is a very strong case that we always have to make. the number of vehicles driving on gasoline or diesel is on the rise in african cities worsening pollution and increasing carbon emissions. the united nations environment program you know is therefore promoting electrum a billet in africa in kenya the biggest emission when it comes to climate change is to drive. and the biggest polluter when it comes to help is the transport sector and within the transport sector all dirty motorcycles are one of the biggest polluters so we want to replace them completely with 0 emissions electric motor cycles like this one. in kenya some 80 percent of the electricity in the country
4:53 pm 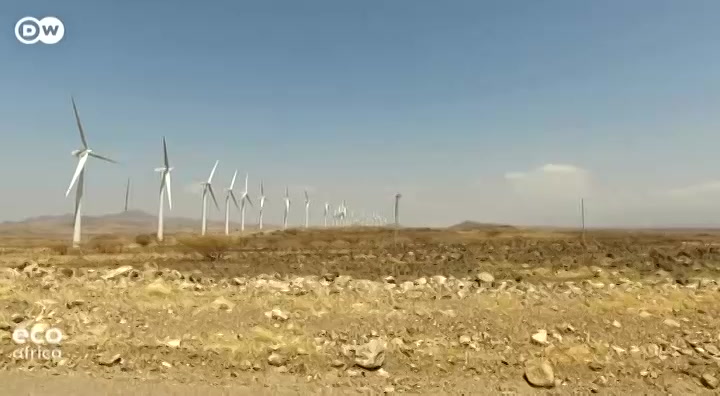 derives from renewables such as solar and wind power and geothermal energy ideal conditions for. and yet there are just $300.00 electric motor pads on the busy streets of the canyon capital the main obstacle to emerge in kenya is inadequate infrastructure and for car drivers the battery range is too limited plus there are hardly any charging stations. for electric cars to be mainstream people say we need to just we need foster just but for fastest to be established we need to electric cars so there must be there must be that group of people that's really too thick to foster risk. there is demand for electric vehicles in conservation areas for example and wildlife such as for i was north of my right. this long produce a used to be got stripped and it's been retrofitted with
4:54 pm 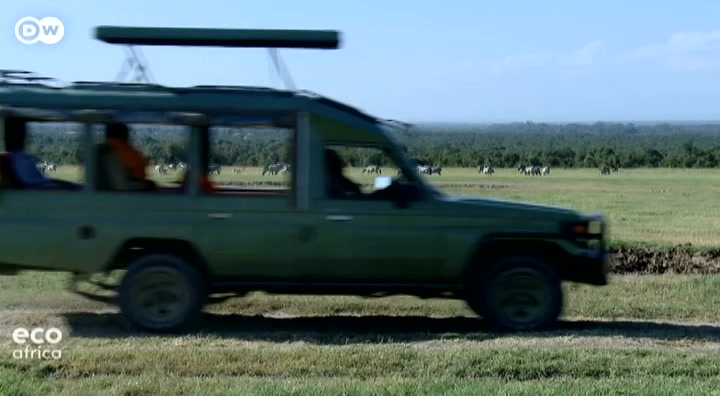 a super quiet electric engine a major advantage here in the savannah. what i like about it is the silence when you're driving. close to the well i mean with no one. here so they don't get this. kind of person are new rules. and. you can stop. with the underworld your without starting unlike the other vehicle which is this the safari jeep was converted by swedish company. the company has set up shop in kenya with 40 employees and installs electric engines and cause a motorbike and soon buses to. going forward we will go more and more towards towards manufacturing of a deeper and deeper level which means that we can make the kenya into the actual central hub for electric vehicles of this region and we can move away from
4:55 pm 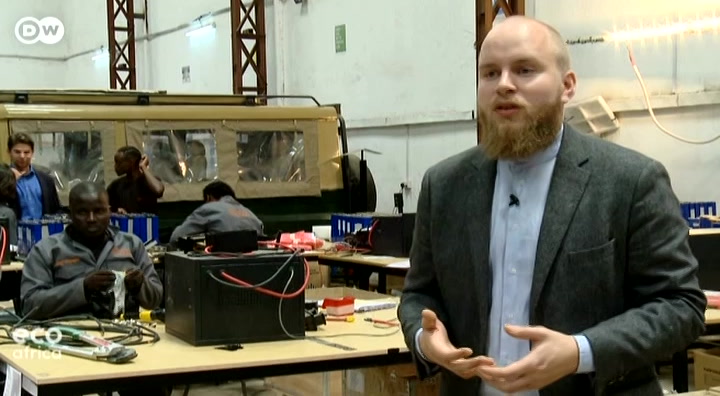 importing these vehicles. for the time being at least electric vehicles remain something of a niche marketing campaign. a lot of ground will have to be covered before they go mainstream. and the quality in nairobi improves. and that's he's certainly an interesting approach and it is good to know that the. chicago bikes a walk in the rain to maybe the idea will cause other african countries as well maybe here in uganda as well with come to the end of this week's equal africa we've glad you could join us and of course we hope you've been able to pick up a few ideas and insights you can use wherever you live i am sundered to know if you are saying by here in kampala the capital over uganda so long for now sandra and goodbye to you dear viewers out there see you again next week until then you can
4:56 pm 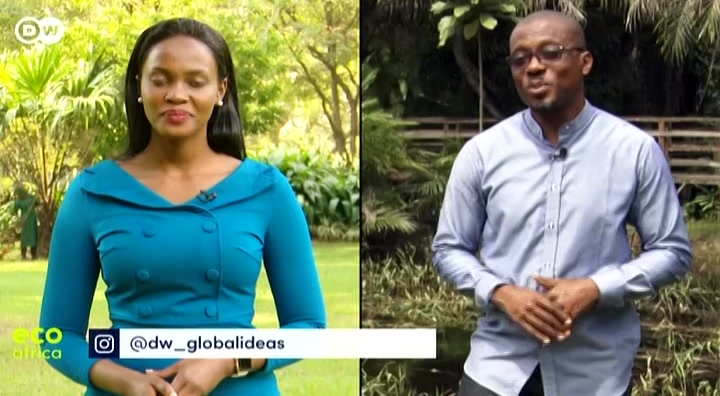 stay in touch with us and keep up with the latest developments on our social media channels for now no time we signing up from the fashion park in lagos nigeria. duck. duck. go.
4:57 pm 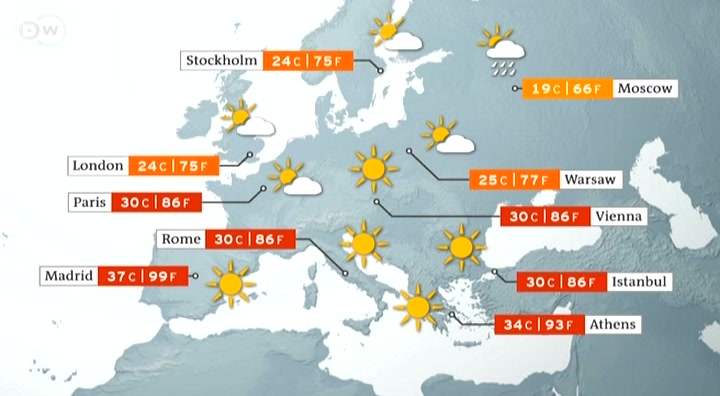 to. a 1000000 tons of flowers dumped into the jews in india never. the best the science of the time and. now a start of converts useful hours into charcoal and chemical free incense sticks. demian bichir 70 gauges a don't miss distance from getting into the room of. the. building.
4:58 pm 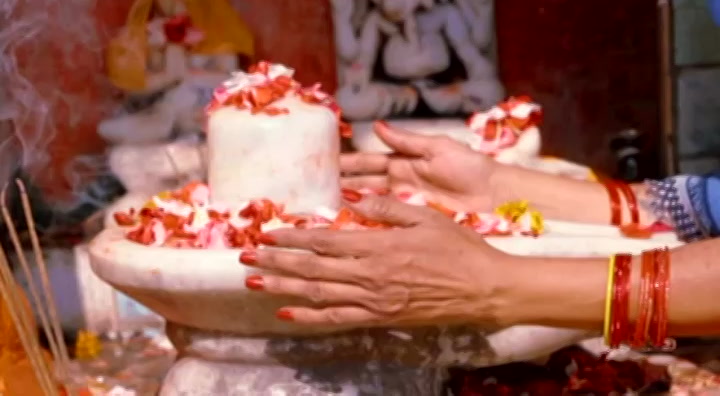 30 minutes on t w. i was issued when i arrived here i slept with 6 people in a room the nights in man it was hardest for. i even got white hair is that. thing that hit my language head no not this gets me a little bush mickey took in truck it's the same thing you want to know their story my friends her fighting and reliable information for migrants. we know this is a scary time for the coronavirus is changing the world changing a lot so please take care of yourself good systems wash your hands if you can
4:59 pm 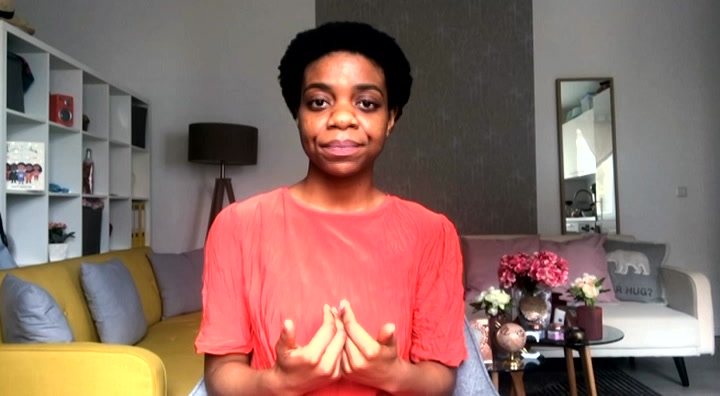 stay at how we deal with you for here for you we are working tirelessly to keep you informed on all of our platforms we're all in this together run together on making sure you stay safe everybody. stay safe stay safe please stay safe. for more posters from nigeria who we are as a people does what money would stunts do you. want don't. often take. the tourist fast moving to the palace. and successful beyond belief. this is not good this is the way we do it.
5:00 pm 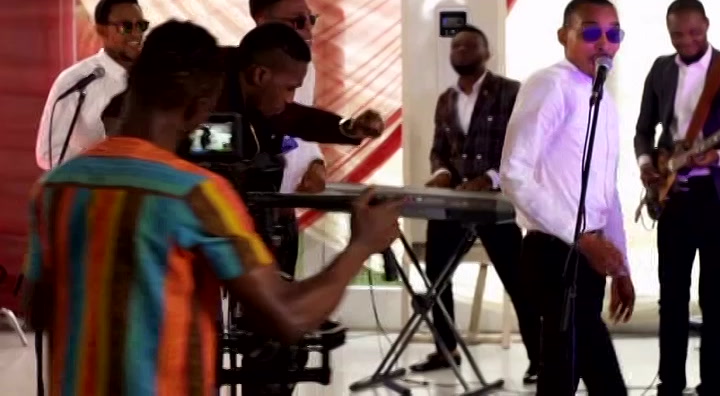 nollywood starts august 7th on d w. the book . this is due to reduce life from growing democracy delayed elections in hong kong harbor stoked 4 year chief executive terry lam says a surge in coronavirus cases is the reason the controversial decision deals to another blow to the territories already believers pro-democracy movement also coming out. for lands famous club scene has been
5:01 pm

something like this for months because of the pandemic but 1st tree the rivers are defying the authorities and moving.
left
right
disc Borrow a DVD of this show DVD
tv